As, I was introduced to the exciting new world of android, I became aware of it’s infinite possibilities. I found out different ways to manipulate the android O.S. , to create softwares that had functionalities extending from beyond the phone itself. In this project I have created an android software to control a small model of a car, which is also integrated with a line follower mode. Even though the motor speed’s not significant enough , I am able to completely control it using phone.

The different functions programmed into it are: front, back, left, right and stop. And, the most unique thing is that it is programmed with a line follower mode, i.e., if you press that particular button then the robot becomes completely autonomous and begins following a black line.All this can be done at a distance of 100m from the RC car.The type of connection used here is based on bluetooth working at about 2.5Ghz, preventing the distortions that may occur at lower frequencies.

In this project I am using an ATMega328 microcontroller along with a bluetooth module, also equipped with two continous rotation servo motors and it's corresponding wheels, it also comes with a QTR8A reflectance sensor array to enable it to work in autonomous line follower mode.The basic setup is as shown in the pic: 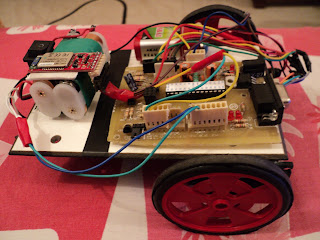 I started off by programming my phone with the basic UI to control my car, providing separate buttons for each type of movement of the car.I transmitted the corresponding commands via bluetooth to my RC car, the car then decodes these bluetooth signals via a bluetooth module, and the microcontroller identifies these signals and does the particular function corresponding to that button.My RC car uses a differential drive system, hence it requires only two servo motors in the front and an omni directional wheel at the back.And the best feature which is the line follower mode is enabled once that particular button is pressed.
And if you have already prepared a black line using an insulation tape, then you just have to navigate the car to the beginning of that circuit and press the line follower button, and then my device calibrates the position of the black line and begins to follow it through all sorts of curves.The pic below shows the reflectance sensor used: 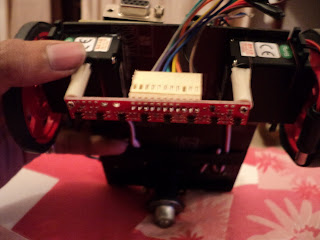 The various applications of the system include:
1.Can be used as a remote spying device , controlled using any ordinary android phone.

2.Apart from the conventional RC cars, here you just have to buy the car no need for the transmitter, you just need an android phone.

3.Any user having an android phone can control the device using my software.

4.The device also works as an autonomous robot, in the line following mode.

5.Can be equipped with cameras and sensors for surveillance and monitoring.

6.It can be the best source of entertainment at your office desk.
The video showing the complete working of the system is: