The system I made , was due to a special request from Startup Village who recently had inaugurated their 10K building. They wanted a system where they could monitor information regarding when all the power was being supplied and when it was not, also where they could monitor the status of the internet whenever it comes and goes, also to monitor the speed of the internet at regular intervals , so this need led to the the rise of the power logger. The work setup: 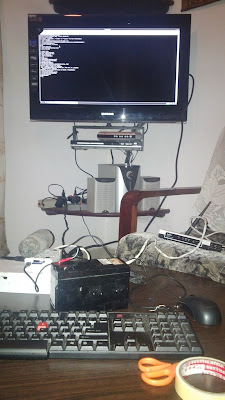 This is basically a system where a user could just plug in the device to a LAN and power it from a wall socket , and which will allow it's user to see all information regarding the power status/ consumption, internet status and internet speed all through a webpage. This system was hosted at the website of startup village itself. The webpage : 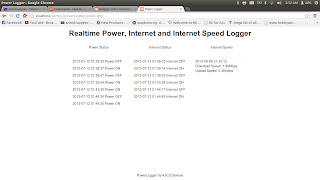 The system basically consists of a microprocessor board running on Linux, the coding was done on python and it runs on the background. The system was designed in such a way that, even when the power is off the device is supported by it's onboard UPS consisting of a 8A 12V battery and heavy duty voltage regulators. The system determines whether power is available or not by monitoring the status of the wall socket onto which it is plugged. Here, the system is also intelligent enough to save data when there is no internet and posts them all together sequentially once it is back online. The client side of the system consists of a very simple webpage displaying various information such as power status, internet status, internet speed, etc. The system: 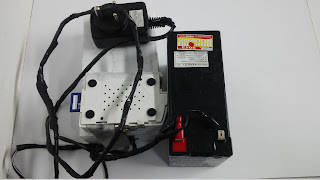 The system gained a lot of recognition, especially from the Minister for Electricity in Kerala, Mr.Aryadan Mohammed and KSEB chairman, Mr.M Sivasankar who further suggested that such a system could be used to monitor power and it's consumption in huge factories having highly expensive machinery which are capable of getting damaged by the power outages. They also said that it would help build a better conscience among people if they could know their current power consumption and take necessary steps to reduce it. The system was also featured in the Deccan Chronicle.With Kerala electricity minister Mr.Aryadan Mohammed , KSEB chairman Mr.M Sivasankar, Startup village chairman Mr.Sanjay Vijayakumar (from Deccan Chronicle): 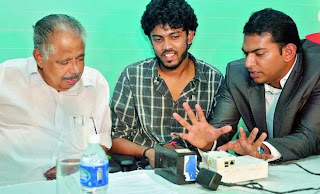 The news article about it: http://www.deccanchronicle.com/130714/news-current-affairs/article/soon-law-curb-fake-energy-firms-aryadan-muhammad