Okay, here I have automated my room in order to control the various electrical devices like lights, fans, and even closing and opening of curtains or doors , etc. This type of automation completely relies on the user's speech commands. Hence a user will be able to control the various devices via merely his/her voice in their desired language from anywhere within the room. Thus, a guy who is too lazy to get out from the bed in the morning to switch on the lights or open the curtains may simply do this by asking the system to do so from the bed itself.A pic of my system is as shown below: 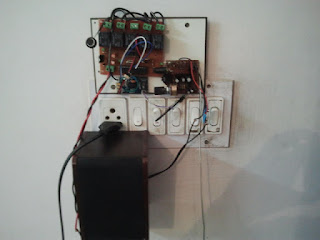 Here, I have used a custom voice recognizer system along with it's provided software using which I trained the commands into the system. A quick sound synthesizer was also used to upload vocal responses for the system when approached by any user. Here, In this system a password protection is provided so that only the real owner of the room may use it, on saying the correct password the system acknowledges back using it's vocal response. Now the system is ready to take on any commands from the user such as to turn ON the lights, fan, open curtains ,lock doors ,etc. When a person wants to leave the room and wishes to secure it, then he/she has to simply say the command "Lock down the room", by which the system is once again password protected preventing any unauthorized use of the device and discouraging intruders. The hardware setup is as shown: 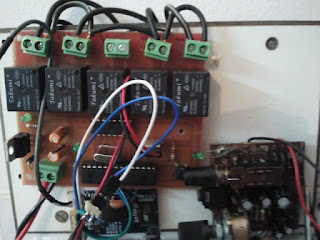 The hardware setup mainly consists of an AT Mega 328 micro controller which is seated on a custom designed PCB board, soldered by me. The custom PCB board mainly consists of a bunch of relays (12V,7A) for controlling each of the individual functions, a relay driver , crystal oscillators , etc. The lines from the switch board are taken out and fed into these relays. Next comes the voice recognizer module seated below the custom PCB board, it communicates serially with the micro controller. Then comes the speaker amplifier unit used for amplifying the speech signals from the module , that is to be given to the speaker box as shown in the 1st pic.The custom PCB board is as shown: 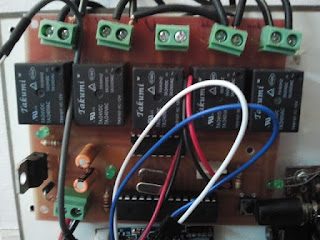 The applications and advantages of this project are enormous, a few of them are:
1.Users are capable of communicating with the device naturally through speech.
2.Users are not required to reach the switch board and turn the switches on manually.
3.A person can use the device from anywhere in the room, by merely using these speech commands.
4.A wide variety of applications including the control of autonomous robots via voice commands.
5.Improved room security providing password protection feature for securing the room.
6.The system provides a vocal feedback to the user as well , to acknowledge the commands.
7.The system is capable of mocking a normal person to person communication

A video demonstration of the whole system is as shown: