The main reason for me to do this project Gspeed was that, I was incapable of carrying around something small without losing it one way or the other. In this case, I used to consistently lose the keys to my Honda Dio scooter which led me to making a bunch of duplicate keys for it. Even though, these keys would work fine, I began to think about what someone can do if they obtained the keys to my scooter. Well, obviously being from where I am that sounds no good, so I designed this fail proof or a fool proof system for security while simultaneously serving other uses as well.

So, the system is a security enforcer. Here, I have developed a pass code based access system to my scooter. So, basically only a person who knows this ‘n’ digit pass code may have access to it. Hence even though if any guy possessing my key tries to jack my scooter he will not be able to use it without my pass code combination. The system also allows the user to change the pass code on the spot whenever he/she desires via a custom user interface provided by me, in case if the user feels insecure about his pass code combination. Here, unless the person enters the correct pass code combination he/she will not be able to access any of the features of the scooter. Even kick starting the engine will not work without the pass code combination. When the correct pass code is entered the engine immediately starts automatically while simultaneously granting access to all the other vehicular features as well.  Here is a picture showing the custom keypad and the system activation switch: 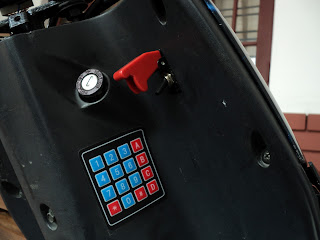 Here, the pass code has to be entered via this keypad provided on the scooter’s dash, whereas the system activation switch is the red missile switch to the right above it. To safely enforce the device, the missile switch cover has to be merely shut down after use.
The system, I designed works by first switching on the system ON switch and then inputting the ‘n’ digit pass code combination and then pressing the key ‘A’ to enter it. To change the pass code, the user simply has to enter ‘B’ and then enter the present pass code, if that is right then the user may enter his new pass code and then press ‘A’ to save it. The visual feedback of this process is seen via a LCD screen mounted on the scooter as you shall see in the working demo video below. 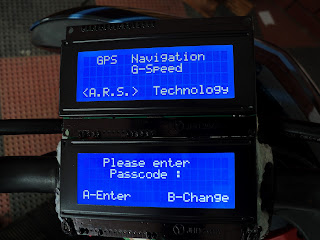 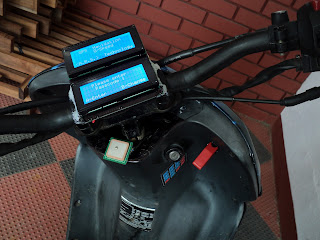 The system as soon as it is activated then leads on to the GPS speedometer aka Gspeed user interface that is the same GPS based speedometer I had developed for my scooter earlier as explained and portrayed in project no: 2 in this blog. It has the following functions:  Present speed, lap time, surrounding temperature, latitude and longitude coordinates, fuel level, date, time, and other vehicular information like registered number, etc.
The system I designed consists of hardware components like an ATMega328 microcontroller with a custom designed PCB incorporating relays, GPS modules, temperature sensors, high current voltage regulators, character LCD’s , keypad, ON/OFF switch etc. The hardware is all tucked away neatly inside a 4X4 inch plastic black box inside the front cover of the scooter as shown below: 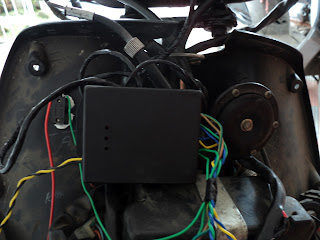 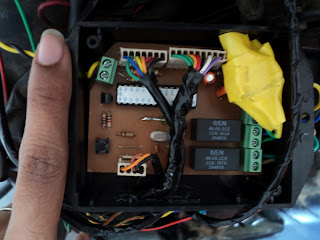 The applications and advantages of the project include:
1. Firstly, it does not allow any guy who thinks he can steal my Dio using a key that I lost hehe.
2. The system is a full proof protector; it won’t allow functioning without the correct pass code.
3. Allows spontaneous pass code changing options.
4. Does not require use of keys for access, a keyless operating system.
5. Allows a user to safely park his vehicle without having the tension of anyone trying to hack it using a duplicate key or other methods.
6. Provides GPS based speed data and a bunch of other data from other sensors.
7. Sleek and stylish design even looks cool.
Finally, the working demo video: